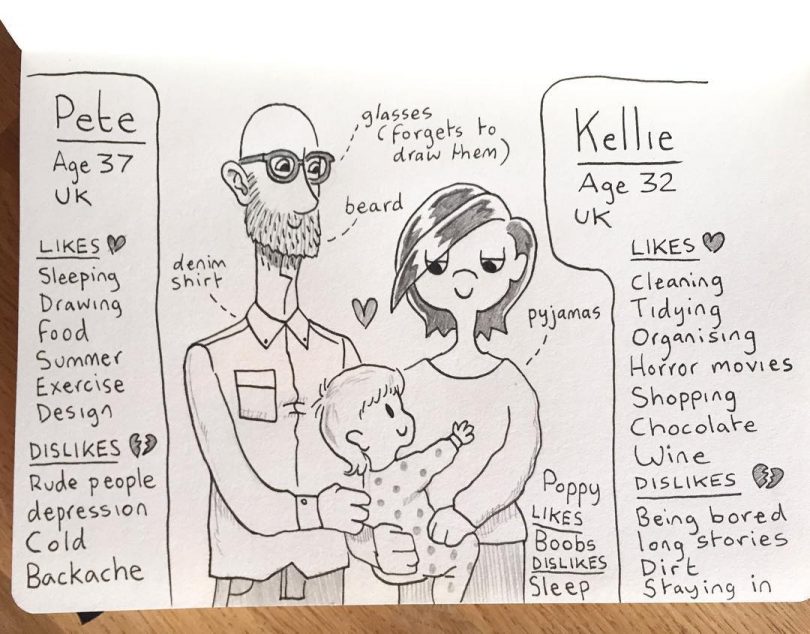 Here's our #meettheartist – I was short on time and space so I couldn't put everything in I wanted. I probably would have focused more on Kellie's love of wine and the way she puts her pyjamas on the second she walks through the door haha … … #art #sketch #relationship #couple #comics #funny #drawing #love #illustrator #illustration #cute #book #boyfriend #girlfriend #doodle #moleskin #wife #silly #romance #instaart #daily #draw #creative #lol #about #us #design #meettheartist #creativity

An illustrator, his wife and their little girl’s cartoon alter egos are quickly becoming Instagram celebrities as they star in their own reality show – cartoon strips that show the realities of daily life, being in a relationship, living as a family and having and dealing with kids presented in a silly and, at times, crude joke-laden way.

In one interview, 38-year-old illustrator Pete Duffield shared how their funny cartoonish alter egos came into being. In one of their dates, Kellie Gage, his girlfriend, asked him to draw a picture of her upon learning that he worked as an illustrator. From then on, things progressed.  As the couple “lived in [the] opposite sides of London” and the distance prevented them from seeing each other often throughout the week, Peter started doing little illustrations for Kellie, took photos of them on his phone and texted them to Kellie. They ended up laughing about each cartoons’ silliness every time.

The cartoons were started as an “inside joke” between them and were never meant for the public’s eyes.

It was only last year that the couple started sharing the illustrations in a shared Instagram account for the world to see. The decision was made after some of their friends suggested to them that they do it saying that they’d be popular in the picture-sharing social media site.

And how true that was! The shared account currently has more than 87 followers!

As True as They are Funny

The popularity of Pete’s illustrations stem from how realistically funny the cartoons are. As the artist takes inspiration from the small things of life, making the mundane into something funny, celebrating sweet moments spent with family and immortalizing some very true but at times crude jokes of family life, everyone can easily relate to them and can see themselves in Pete’s and Kellie’s and now their daughter Poppy’s cartoon alter egos.

As Poppy is getting older (and has teeth) breastfeeding is a little more painful for Kellie at times 😱 — If anyone would like to see the drawing I made for the giveaway winner @mzatsirk you can see it on her page 😊 . . . #art #sketch #relationship #couple #comics #funny #drawing #love #illustrator #illustration #cute #book #boyfriend #girlfriend #doodle #moleskin #wife #silly #romance #cartoon #daily #draw #creative #family #relatable #breastfeed #breastfeeding #mummy

“Whenever something funny happens, or something sweet, or really anything that causes strong emotions, I make a note of it on my phone. I have a big list, some of them never make it into pictures. I pick the best ones when I sit down to draw,” Pete said.

He added that there are drawings both he and Kellie decided not to share in their account describing them as “more graphic”. However, he laughingly admitted that at times, they both agree not to share a certain illustration only to change their minds and upload it later on just for the sheer fun of seeing other people’s shocked reactions.

The couple even Instaggramed one shock response from Hollywood star George Takei about how the content is so graphic yet he can’t stop looking at them!

@georgehtakei shared our work on Facebook! 😳 — The last few days have been crazy, we've been featured on The Huffington Post, La Repubblica and more! A warm welcome to the thousands of new followers 👋🏻☺️ — Kellie and I are blown away by all the kind messages and lovely support. You're all incredible people ❤️ —- We're definitely going to do a giveaway in the next few days so keep the suggestions coming in. Ideas so far are signed prints, personalised drawing, printed t-shirt (!) and greeting cards 🙂 — . . . . . . #art #sketch #relationship #couple #comics #funny #drawing #love #illustrator #illustration #cute #book #boyfriend #doodle #moleskin #dad #daddy #silly #romance #cartoon #daily #draw #creative #family #relatable #startrek #giveaway #comicart #50k #georgetakei

While Pete and Kellie enjoy the reactions their pictures get and actually spend time reading through all the comments every uploaded illustration in the site gets, they still don’t understand the fascination of the public about their private lives as shown in the funny cartoons. But the couple has made it a point to just take everything in stride .

“I think in years to come they will be a really nice visual diary of the silly stuff we used to laugh about and get up to on a daily basis,” Pete commented.

I've been making a picture book for Poppy, here's the first spread 🙂 (swipe through to see close ups and the whole spread) Each spread will focus on a different thing that she loves. The first spread is bathtimes with Daddy 😍 ——- GUYS! We're going to be featured on boredpanda.com and I need to choose 10 images to share. If you have any favourites please help us choose 🙏🏻🙏🏻🙏🏻 . . . . . . #art #sketch #relationship #couple #comics #funny #drawing #love #illustrator #illustration #cute #book #boyfriend #doodle #moleskin #dad #daddy #silly #romance #cartoon #daily #draw #creative #family #relatable #illustrationartists #bath #comicart #book

The couple agree on one thing, however, when it comes to the illustrations – their most cherished ones are those that are of  their growing bundle of joy as they frequently cover the the more important events of their lives. Pete hopes that when their daughter’s all grown up, she’ll find the cartoons fascinating looking through them.

Look up this small family’s drawn alter egos in here! 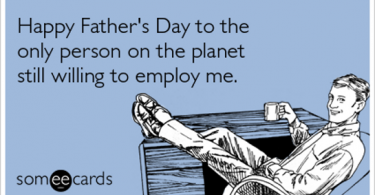 We’re tired of taking Hallmark holidays so seriously. In celebration of your #1 fan, here are[More...] 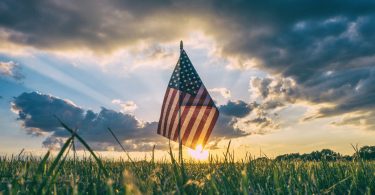 4th of July is just around the corner and Americans love to celebrate the holiday that commemorates[More...]